The Relationship of Your Gut to Your Mental Health

HOW DOES YOUR GUT RELATE TO CONDITIONS

SUCH AS ADHD, DEPRESSION, ANXIETY, AUTISM, AND OTHERS?

Have YOUR OWN thoughts? Your peers want to hear from YOU!

Share what you think about this in our community!

“Scientists are increasingly convinced that the vast assemblage of microfauna in our intestines may have a major impact on our state of mind.” 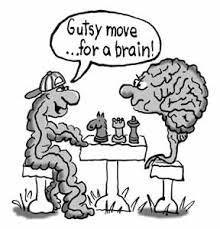 Do you ever feel that that heavy lunch makes you sleepy and rrrreaaaaallly hard for you to focus?

Well… sometimes I do feel exactly like that! Or when I had a major sugar binge I just physically – and with it mentally – seem to crash, but those seem to be temporary or “meal-to-meal” based.

So what exactly do they mean?

We do have a direct connection between our brain and our gut called the vagus nerve. In the past it was said that the communication goes primarily from the brain to the gut to tell it when to do what, for instance to go into reverse when you are sick etc. There might have been a little communication to the brain telling it “hey, I am empty, feed me” but beyond that?

Welllll….. apparently there is a lot more going on….

Also according to Scientific American

“The gut-brain axis seems to be bidirectional—the brain acts on gastrointestinal and immune functions that help to shape the gut’s microbial makeup, and gut microbes make neuroactive compounds, including neurotransmitters and metabolites that also act on the brain.

These interactions could occur in various ways: microbial compounds communicate via the vagus nerve, which connects the brain and the digestive tract, and microbially derived metabolites interact with the immune system, which maintains its own communication with the brain.”

In plain English:  If all those little bacteria in your gut are messed up, the messages to your brain… well get messy as well. Communication might go wrong or might not be happening as much or as little as it should.

In general it looks like that if certain gut bacteria are missing or there are simply not enough of them more “high-risk” as well as anxiety-type behavior is observed with measurable changes in brain activity.

Furthermore, certain imbalances of gut bacteria during infancy has been linked directly to unfavorable changes in gene expression leading to learning, memory, and motor control issues.

The good news is that these behavioral changes might be reversible as long as a subject is exposed to normal microorganisms early in life. However, it is also believed once one reaches adulthood, colonizing your gut with bacteria might not influence behavior significantly anymore. So I guess….. GET TO IT?

Again According to the Scientific American

“That dietary treatments could be used as either adjunct or sole therapy for mood disorders is not beyond the realm of possibility.”

So THAT is cool!

Today it looks like several different approaches to diet show a significant impact on mental health in people who are diagnosed with things such as ADHD, autism, and mood disorders such as depression and anxiety.

But sometimes the symptoms of an imbalance are not as drastic. Following are some of the more subtle signs of for instance depression to keep an eye out for

So what are some possible solutions they have tried?

For example the GAPS diet may help a conglomerate of symptoms that can fit the diagnosis of either autism, or attention deficit hyperactivity disorder (ADHD), attention deficit disorder (ADD), dyslexia, dyspraxia, or obsessive-compulsive disorder, just to name a few possibilities. Digestive issues, asthma, allergies, skin problems, and autoimmune disorders are also a lot of times things that benefit from such a diet BTW.

Here a quick overview but we will talk about it more later:

For an extra interesting twist…… You know why pediatricians are often really concerned and pay attention to babies who show consistent and persistent constipation? Because a direct correlation between such and autism and ADHD is known!!!!!! Researchers have found that autism-related gut problems are already common in infancy – even before autism’s behavioral symptoms become obvious. These include chronic constipation, diarrhea and food intolerances.

Soooooooo gut issues are the first hint to potentially serious issues with the brain!!!!!!!

So maybe the idea of fixing the gut (not just treating the symptoms!!!!) to put the brain development onto the right path is not such a weird idea afterall?!? To Optimize Your Gut Microbiome can’t help!

So THAT is REALLY cool!

Let us know if you have tried any of these, if you have made any changes and how you felt.

If you have questions please post those as well. If You have them I am sure others do too!

So let’s find the answers that work for us, you, me.

Leave any comments or questions in our Chat! section!

1.            Schmidt, C., 2015. Mental Health May Depend on Creatures in the Gut: The microbiome may yield a new class of psychobiotics for the treatment of anxiety, depression and other mood disorders [Online]. Scientific American – Division of Nature America, Inc. Available: HTTPS://WWW.SCIENTIFICAMERICAN.COM/ARTICLE/MENTAL-HEALTH-MAY-DEPEND-ON-CREATURES-IN-THE-GUT/ [Accessed September 25, 2017].

Check Out Our Topic Areas

Our Most Recent Posts: